Hello everyone! It's been a looooooooong time! Crazy how life gets...well, crazy! XD Lots has happened, but I'll give you a brief update:
Started summer school to begin my schooling at BSU. I'll be getting my bachelor's degree in
Communications- Video Production. I'm soooo excited!! It's really all thanks to video editing really. If I had never tried it out and found out how fun it is, I probably never would have decided to make this my major. :)
I went to Anime Oasis 2011 a few weeks ago. I cosplayed as Mitsuki from Full Moon wo Sagashite. It was lots of fun! I had a great time! I also won second place in the amv (anime music video) contest! I was sooooooooooooo HAPPY! I'll be going to another convention in August, at which they will have another amv contest, so I'll be entering 3 other videos into this one. It's actually a basic fan convention, so I can pretty much submit anything. ^_^ 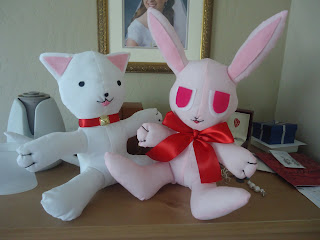 Takuto and Meroko. I made these two and carried them around with me at the con (they are also from the show and I knew they would help people to know who I was. Plus they are just so cute! ^_^ ) 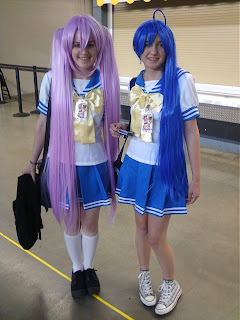 Two girls cosplaying as characters from Lucky Star
(never seen it. I just thought their costumes were great!) 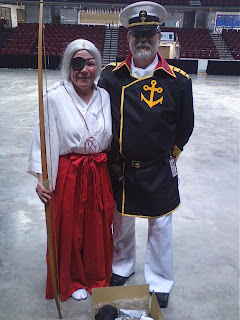 Lady Kaede from Inuyasha and...not sure what the guy is from. ^^; But he looks great! 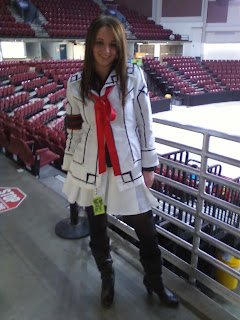 A girl cosplaying as a night class student from Vampire Knight (I LOVE these outfits! Vampire Knight student uniforms are my favorite out of any anime I've watched so far). 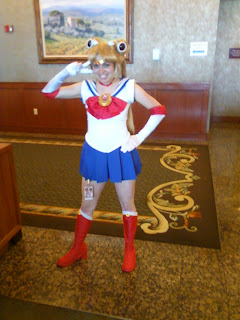 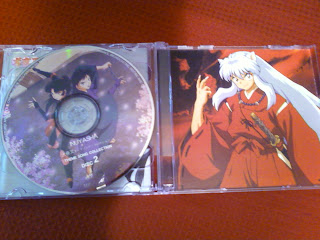 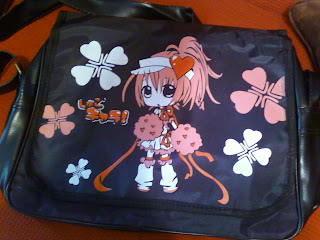 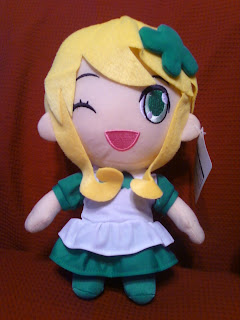 Yes, I splurged... ^^; Su from Shugo Chara. I just thought she was soooo cute I couldn't resist! :D 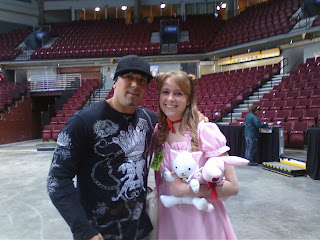 Me and Jason David Frank, the original green ranger from Power Rangers. Oh the memories...

Here is one amv that I'm certain on submitting:
(Please feel very free to open this in YouTube. Sorry to admit it, but I'm too lazy to try and figure out how to re-size this thing, lol!)

I just finished one of the best things I've ever read. It's a manga (Japanese "comic book," but I'd rather call it graphic novel) called Kitchen Princess. Its about a girl named Najika who parents died when she was very little. she was crying one day, and a boy came to her and gave her some flan with a pretty spoon and told her, "When you eat something good, it makes you smile." Najika was happy and promised him that someday she would make him the world's best dessert. Najika grows up (15) and finds a lead to the school that her "flan princ
e" is probably attending. She applies for the school, and because of her impeccable taste and amazing cooking skills, is accepted into the school, w
here she hopes to find her flan prince. It's absolutely adorable, and there are sooooo many twists and turns in the story. Whe
n I thought I had things figured out, it turned out that I was wrong and the story just kept
getting better and better! 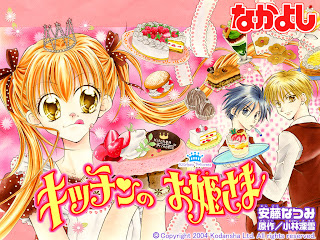 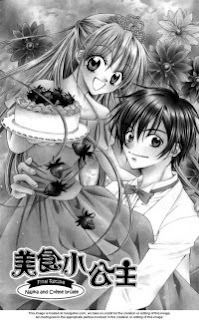 What's also fun is that there are recipes from the story in the back of the book to try out! Here's one called Rainbow Jelly! 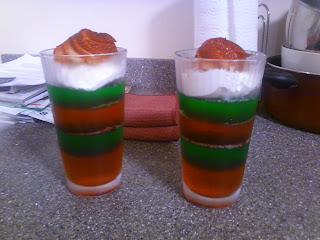 There are two ways you can make this: The hard way, or my variation. The hard way probably has more natural flavor to it, but is much more time consuming. ^^;

Rainbow Jelly
Makes: 8 glasses (only 6, if doing my variation)
1 cup each of 5 different juices
5 bags gelatin
2 tsps. granulated sugar for each juice

1. In a small pot, add 1 cup juice over low heat. When it warms up, add the granulated sugar and stir. When the sugar melts, stop the heat. Make sure you don't let the mix boil.
2. Put gelatin in the pot and stir until it is completely
melted.
3. When you stir it, white foam will form, so remove it with a slotted ladle, and the jelly becomes smoother.
4. Put the pot from step 3 in a bowl filled with ice to cool. When the mix is cool, pour it into eight glasses.
5. Put the glasses in the refrigerator and leave the
m in for an hour. When the jelly hardens, repeat the steps and add the different juices one at a time in the glass.
Top with fruit if desired.

Okay, so that's the original recipe. Mine is the same idea, just simplified. All you do is buy however many colors you want of Jell-o (I chose only two, strawberry and lime, for my first try. Two Jell-o packets will end up making 6 glasses). Make half the packet according to the box directions. Let the Jell-o liquid cool, and then pour evenly into glasses. Leave glasses in refrigerator for one hour. Then repeat the same thing, but with another color, then the same thing with the other half of the first, and then the same with the other half of the second. You can top it with whipped cream and fruit if you'd like (it makes it look really pretty!) 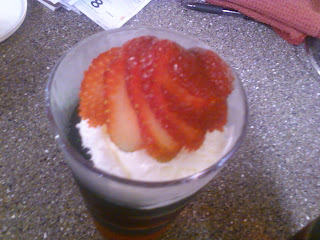 You can even try doing lots of different kinds of Jell-o, since different colored layers is what the original recipe was aiming for (hence the name, "Rainbow Jelly"). :)

I would totally give this story a million stars! It was that amazing! :D
Posted by Melissa at 2:32 PM No comments: